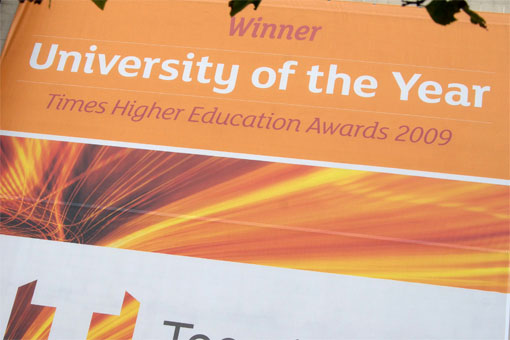 The University of the Year Award is one of the most prestigious in the national higher education calendar, and was presented to Professor Graham Henderson, Vice-Chancellor of Teesside University, at the Grosvenor House Hotel in London.

Professor Henderson said: ‘Teesside is the first modern university to ever receive recognition as the University of the Year. It was therefore both an amazing moment and a huge personal honour for me to be able to accept this award on behalf of my University’.

Teesside University beat off strong competition to make the finals and was the only northern university to make it through to the final six in the University of the Year category.

The judges’ panel sent representatives, led by the Times Higher Education magazine’s editor, Ann Mroz, to Teesside to look at the campus and meet staff, students and graduates, and also spoke to the management of the university, trade, student unions, and met with graduates who had set up their businesses on campus and visited the Crime Scene Laboratory House and the University’s state-of-the-art Environmental Chamber.

Ann Mroz said ‘Teesside is a fantastic example of an institution that has put itself firmly at the heart of its community, embracing with zeal its mission of working with both individuals and businesses to help them achieve their full potential. With an ambitious 16-point plan it has helped to create and sustain jobs in the midst of a recession. The university has been a beacon of hope in the region’s economic gloom. It also set a fine fiscal example by turning in a strong financial performance of its own. Teesside is a very worthy winner of this year’s top accolade.’

For more information about Unique Improvements training courses, you can phone us on 0151 480 2202, download our prospectus, or leave a comment below…